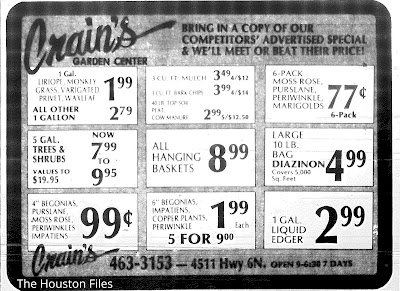 Today, this is a Discount Tire, with Discount Tire's store being built in 1989. Based on aerials, the original garden center dates back to the 1970s. From The Houston Post, June 12, 1985.

Sometime around late 2006 the hotel was closed and demolished as per Google Earth and HCAD records. The ad is from a tourist guide from the mid-1980s. 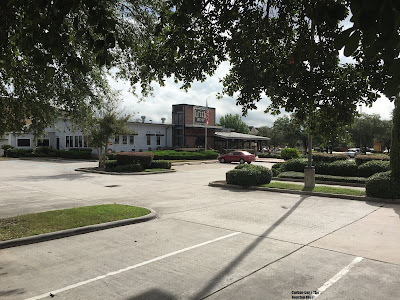 Brick House Tavern + Tap opened January 20091. It was originally built as Joe's Crab Shack in 1997 and all records indicate that it was the first Brick House to open, with the underperforming Joe's closing in 2008 for the new conversion into the restaurant concept.

Picture taken by the author September 2018, Google Street View of the building as Joe's 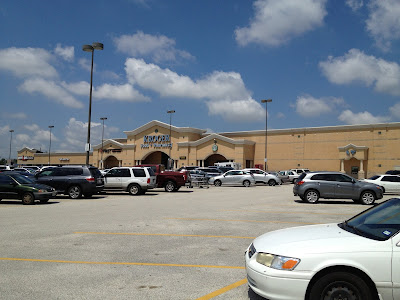 This post was originally posted at Safeway and Albertsons in Texas Blog, another blog of the author's (currently mothballed and in talks to change hands). When Albertsons Inc. pulled out of Houston in early 2002, a great number of the stores were sold to Kroger, which quickly reopened them. The stores originally kept all the Albertsons décor (this store, formerly Albertsons #2766, was remodeled in 2013 according to official sources, so that's probably when they went, unless it changed sooner) due to the stores being practically brand-new when the plug was pulled. The store's layout is a copy of the Port St. Lucie, Florida store closed in 2012, with some minor changes. 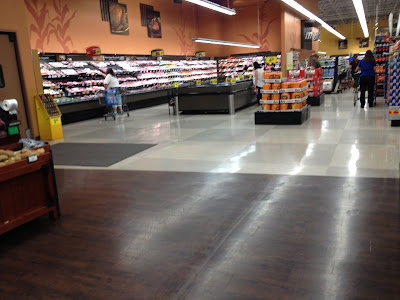 The Starbucks was in the same place, the deli and meats were in the same place, and while the center store probably saw a rearrangement at some point, there were a few notable changes in the front. The old camera center had been converted to offices with the pet supply area converted to HBA, with the pharmacy next to it (it also added a walk-up pharmacy), and a bank space as well (this may have been part of the original layout), as well as a few other changes. The area around the florist was downsized (didn't see evidence of the former in-store dry cleaners), as the customer service desk was moved either next to the restrooms or in front of the "Albertsons Reading Center" area. According to HCAD, the store was built in 1999, and all photos here were taken in summer 2016 by the author.