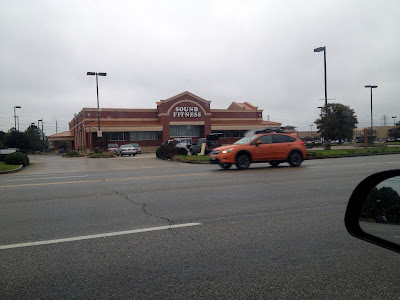 Built as part of a redevelopment of the former John Eagle Honda location, this was an Eckerd drug store, and opened in late 2003 or early 2004 (the building was built in 2003 as per HCAD records), and one of the last stores to be built as an Eckerd. However, the building was built at the wrong time. By the time it opened, Eckerd's owner, J.C. Penney, was about to divest the chain to competitors, the finalists being Jean Coutu Group, which operated primarily Canadian drug stores but had a U.S. division in the form of Brooks Pharmacy (in the New England area), and CVS Corporation, which had recently entered the Houston market, and had a store by February 2004 less than a mile away at Fallbrook and FM 1960. In mid-2004, Eckerd was sold. The stores in Houston and much of the South were sold to CVS Corporation, and the stores in the Eastern Seaboard were sold to Jean Coutu Group, which merged them with the Brooks Pharmacy group to create Brooks Eckerd Pharmacy. Initially both chains ran the Eckerd stores under the Eckerd name, but in September 2004, CVS announced it would shut down "at least 50" Eckerd stores in Texas, with the rest becoming CVS stores. (Brooks Eckerd would continue to run the stores as Eckerd until 2007, when Jean Coutu Group sold the division to Rite Aid). The store at FM 1960 and Eldridge (officially 12620 W. FM 1960 as per HCAD) changed hands in mid-2004 to Anthony G Jr. Mancuso Trust, associated with CVS, and it is likely that the store had never become a CVS, as CVS changed out the oval-shaped Eckerd signs in favor a traditional rectangle, and aerial images indicate that by spring of 2005, the virtually-new Eckerd was empty. At an unknown point later (sometime before December 2007), Sound Fitness moved in, but it has been vacant for the last few years (it was definitely closed as of January 2017, and the last time it was known to be open was in 2013). In 2017, the trust divested the property. Picture above was from the author, January 2015.